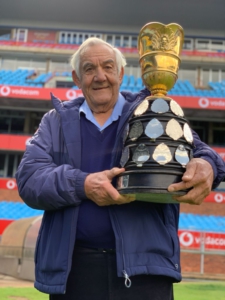 Frik du Preez, Northern Transvaal (Blue Bulls) Legend and SA’s Player of the 20th Century, was honoured on Monday by the Blue Bulls Rugby Union when the Northern Pavilion at Loftus Versfeld was named after the former Springbok lock.

‘Oom’ Frik, who spent most of his career at lock or on the flanks, was born on 28 November 1935 and represented Northern Transvaal and the Springboks. He represented Springboks on 87 occasions and scored a total of 87 points while in the green jersey.

Du Preez made his test debut for the Springboks on 7 January 1961 on the flank against a powerful English team at Twickenham. He played his last test on 7 August 1971 at the age of 35, wearing the number 4 jersey, against Australia at the Sydney Cricket Ground.

He was an excellent all-round footballer that often left crowds and opposition in awe of his skills. The rugby history books record one of his most memorable moments as “DIE DAG WAT FRIK DU PREEZ GEDROP, GEPLACE EN GESCORE HET”…  which describes the 1969 Currie Cup final between Northern Transvaal and Western Province. ‘Oom’ Frik put in a masterful performance that is still talked about today. The legendary lock managed to score in every manner when he kicked a penalty and a drop goal, before scoring a try and converting it. Northern Transvaal won the match 28-13.

Although he was not particularly tall standing at 1.89m, he was a tower of strength in the line-out. In addition, he had a fantastic turn of speed and fine running skills with ball in hand, as he showed in the try he scored against the British Lions in 1968.

According to Willem Strauss, president of the Blue Bulls Rugby Union, honoring ‘Oom’ Frik further enhances the strategy to keep their values, traditions, and history strong. This also includes bringing back the light blue jersey, the Daisy and making the Carlton League strong again.

“Oom Frik is an all-time legend and thanks to him, the players before him and those that followed, Loftus Versfeld and the Vodacom Bulls became iconic in the world of rugby.”

Frik du Preez said that this accolade was a tremendous honor for him, and he would like to thank the BBRU for honoring him in this way, “I see this as a tribute to all former Northern Transvaal and Bulls players. Rugby is a team sport, and without my teammates, I would not have been able to achieve the success I did.”

Renaming the North Pavilion after Frik du Preez, forms part of the upgrading of the pavilion which will also include a Bulls Museum.

We’ve got great news to share – you can now book online for Lemang Agricultural Services’ National Certificate courses and short courses! The new web pages also contain descriptions of all the courses available. Book online today for the following:

Springboks Arno Botha and Trevor Nyakane have been drafted into the matchday team that will host the Cell C Sharks in their Rainbow Cup SA clash at Loftus Versfeld on Saturday, 15 May 2021.

The duo’s inclusion at blindside flank and replacement prop sets the stage for an expected battle of epic proportions amongst the forwards.

A nod to Springbok flank Marco van Staden whose 22 tackles against the DHL Stormers disrupted proceedings to such an extent that their attack was stifled on several occasions.

The only other change sees flank Elrigh Louw shifting to the bench.

The top of the table clash between the current frontrunners is a tantalising thought with both teams enjoying victories over each other, and this weekend’s meeting shall be no different according to Vodacom Bulls: Director of Rugby, Jake White.

“We’ve had a few epic battles thus far and the Sharks will be keen to get one over us at Loftus as it is something they’ve yet to do,” said White.

“The forward tussle is going to set the tone while both backlines are brimming with relentless talent so it should make for an exciting but hard encounter,” he added.

Kick-off is scheduled for 18h15 with the match being broadcast live on SuperSport Grandstand and Rugby channels.

The big PRO14 Rainbow Cup SA clash between the leaders on the log, the Vodacom Bulls and Cell C Sharks, kicks off at 18h15 on Saturday, while the Emirates Lions host the DHL Stormers earlier in the day.

The match at Emirates Airline Park will kick-off at 13h30 on Saturday and is part of a list of confirmed fixtures released by the organisers on Tuesday.

The kick-off times and venues for the final three rounds of the PRO14 Rainbow Cup SA were also confirmed, with the competition headed for a thrilling final round on Saturday, 12 June, when the two coastal sides welcome their two inland opponents to Cape Town and Durban.

After two strong performances in the opening rounds, the Cell C Sharks lead the standings with a full-house of 10 log points, followed by the Vodacom Bulls on eight.

The DHL Stormers, who were edged by four and three points respectively in their first two matches by the teams at the top of the log, are third on two points, while the Emirates Lions are on one – a four-try bonus-point they got for fighting until the end in their clash in Durban last weekend.

Note: All fixtures are subject to change.

Vodacom Bulls Director of Rugby Jake White has adjusted his match-day squad slightly as they prepare to travel to the Cape where they will face the DHL Stormers at the Cape Town Stadium on Saturday, 8 May 2021.

Headlining the changes is the return of Springbok no.8 and #TrueToTheBlue captain Duane Vermeulen. He will resume the captaincy from fellow Springbok Nizaam Carr with Carr dropping to the bench, from where he will be looking to undoubtedly provide a crucial impact when called upon.

The backs have been adjusted slightly with a direct exchange as James Verity-Amm and Chris Smith switching out for David Kriel and Morné Steyn respectively.

The heavy men up front will only see one other change, outside of the return of Vermeulen, with Walt Steenkamp starting in the number 4 jumper as Janko Swanepoel shifts to the bench.

The Vodacom Bulls boasts a bench packed oozing with talent and like last weekend, will provide fresh legs and more energy.

“Last week certainly proved how vital it is that we continue getting as much competitive rugby under our belts,” said White. “The players need little motivation for another brutal North-South derby and we are definitely up for the challenge against a solid DHL Stormers outfit.”

Kick-off is scheduled for 18:15 with the match being broadcast live on SuperSport Grandstand and Rugby channels.

The Blue Bulls Company is delighted to announce the signing of centre Harold Voster, who returns to South Africa from Japan. Voster enjoyed a stellar career across the Jukskei where he represented the Xerox Golden Lions and Emirates Lions accumulating 70 caps in the Vodacom Super Rugby and 17 more in the Currie Cup.

In 2018, the hard-running centre made the move to Japan where he turned out for the Panasonic Wild Knights. Voster has established himself as a no-nonsense centre who wields blistering pace and explosive strength which was rewarded in 2017 as he donned the South Africa A jersey against the French Barbarians.

“Attracting the type of talent Harold possesses is exactly what we are looking for at Loftus Versfeld. His signing adds immense depth to our backs and we are keen to see what he brings to the table,” said Vodacom Bulls Director of Rugby, Jake White.