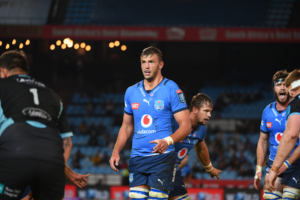 There will be no weaknesses in the Cell C Sharks team and the Vodacom Bulls will have to be at their best when the South African rivals meet in a historic Vodacom United Rugby Championship quarterfinal at Loftus Versfeld on Saturday, lock Walt Steenkamp believes.

The long-standing adversaries will be no strangers to each other, particularly in squaring up in crucial playoffs stages. The two sides have faced each other in no less than two back-to-back finals in the domestic Carling Currie Cup, and at 13h45 on Saturday, in a milestone encounter, will play their first playoffs game in the Vodacom URC.

The two teams have battled it twice already in the round robin stages of the championship with the coastal side from Durban having the upper hand with wins in both encounters. It is for this reason that the Vodacom Bulls are well-aware that the Springbok-laden Cell C Sharks will have no weaknesses for them to exploit this weekend.

“The Sharks have a big scrum. The last time we played them, I think we gave away about four or five penalties in that area. So, this week, that is part of the things we have worked hard on. That is a big area we will need to be focused on. Then we will also need to focus a lot on our own game… It will also be important for us to maintain our discipline,” is the 26-year-old Steenkamp’s observation in the build-up to the Vodacom URC quarterfinal showdown.

“I think their pack as a whole is very good. We can try to put some pressure in the lineouts, but they are a great pack as a whole and there are no weaknesses in their team.”

Historically, the altitude at the Highveld is widely believed to be an advantage for the Vodacom Bulls at Loftus Versfeld. However, against a rival like the Cell C Sharks, who are well-accustomed to the Tshwane conditions, the altitude is not expected to be a factor.

“They always say that altitude matters, but I think the Cell C Sharks are prepared. They have played here at Loftus a lot, and they have beaten us here,” said the towering lock.

“They come from a humid and warm place as well, Durban. We always hope that the altitude gives us some advantage, but on the day it’s 50/50.”

Steenkamp has throughout the season been one of the standout and consistent performers for the Vodacom Bulls, where he has partnered fantastically in the lock combination alongside Ruan Nortje.

The Rustenburg-born workhorse may have been familiar with playing in a cross-hemisphere competition after having been part of the Vodacom URC predecessor, PRO14 Rugby, while still with the Toyota Cheetahs before he joined the Vodacom Bulls in 2020, however, being part of the playoffs is new territory for Steenkamp.

“From a personal point of view – I have previously played PRO14 Rugby when I was at the Toyota Cheetahs and never achieved a playoffs spot. Now with the Vodacom Bulls, in our first season in the Vodacom URC, to achieve this [playoffs spot] is great. We just have to get the job done Saturday,” he said.

“From a team point of view, everyone is on the same page, we know what to do and now need to go out and do it.”

The Vodacom Bulls will be leaning heavily on the experience of their mentor, director of rugby, Jake White to, hopefully, give them an edge and certainly give them motivation for the weekend’s clash.

“Coach Jake is a great coach. He has won the World Cup, he took the Brumbies to the Vodacom Super Rugby finals, he’s played in the Japanese League final, he has participated in the finals of the French League. He knows very well what it takes to play finals rugby. He gives us the tools and our job is to execute,” said Steenkamp.

“In knockout finals rugby, your mindset changes – it’s must-win matches. If you lose, you’re out. So, we will have to give 100%.”