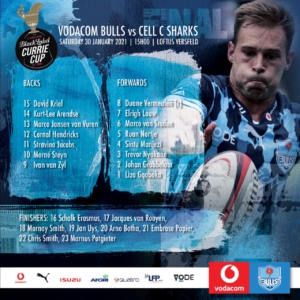 Vodacom Bulls Director of Rugby, Jake White, has named a full-strength matchday squad that will face the Xerox Lions in their Carling Currie Cup semi-final at Loftus Versfeld on Saturday, 23 January 2021.

Stravino Jacobs retains his spot on the left wing as a revamped backline sees the return of David Kriel (fullback) while Cornal Hendricks and Stedman Gans resume their successful partnership in the midfield.

Kurt-Lee Arendse is set to continue his attacking form on the right wing while Ivan van Zyl and Morné Steyn continue with their halfback pairing as the latter celebrates a ton of provincial matches for the Vodacom Bulls.

Steyn’s contributions to the Vodacom Bulls at the provincial level has been one of dedication and loyalty with all his appearances having been in the light blue jersey.

His 76 Carling Currie Cup caps alongside 18 Vodacom Cup appearances coupled with five sanctioned friendlies is testament to not only his immense talent but also his professionalism.

Amongst the forwards, Duane Vermeulen resumes the captaincy and will man the back of the scrum alongside Elrigh Louw and Marco van Staden as blindside and openside flank respectively.

Sintu Manjezi has been named at no.4 lock while his partner Ruan Nortje continues in his role as lineout coordinator in the no.5 jumper.

The young yet incredibly talented Schalk Erasmus will have the confidence knowing that his role at hooker will be aided by two Springbok props in Lizo Gqoboka and Trevor Nyakane.

The bench is littered with players who have given their all when called upon and this weekend’s finishers are no different with Arno Botha, Jacques van Rooyen, Embrose Papier and Chris Smith set to provide vitally important fresh legs in a crucial match.

“We have reached the business end of the Carling Currie Cup and I must commend our entire squad on getting us to this point. Every player in our ranks has contributed to our cause with enthusiasm and a never say die attitude,” said White.

“Focusing on this weekend has been in our minds for the last two weeks and we have done all we can in terms of preparation. We know how to win and we have to just that against a team that has pushed us each time we’ve played them,” he added.

Vodacom Bulls Director of Rugby, Jake White, has named an extended squad in preparation for the Carling Currie Cup clash against the Xerox Lions at Loftus Versfeld on Wednesday, 6 January 2021.

The larger than normal group is mainly due to the fact that the team is still awaiting a few Covid19 test results.

The final match day squad will be trimmed and finalised as soon as possible.

“It’s been an interesting and challenging season to say the least, with the past two weeks probably being our most testing yet. We haven’t had a lot of time together following the isolation protocols, which doesn’t make it ideal going into a crunch game like this one,” White explained.

“Having said that, we’re just excited to be able to play again and get our campaign back on track.”

Kick-off is 16:00 and will be televised live on the Super Sport Grandstand and Rugby channels.