Centurion, 3 June 2020 – AFGRI Group Holdings, an investment holding company with interests in a number of food, agriculture and financial services related companies providing products and services to ensure sustainable agriculture and food security, is proud to announce that its in-house legal department won three awards at the In-House Community Counsels of the Year Awards 2020, held from Hong Kong last week.

This is the third consecutive year that the AFGRI Group Legal team has won the “South African Legal Team of the Year” award and it’s the second consecutive time that they have won the “South African Small Team of the  Year” award. The international judging panel was particularly impressed with the team’s demonstrated ability to be innovative, efficient, and cost-effective in a challenging environment.

According to Acting CEO of AFGRI Group Holdings, Tinus Prinsloo, “By winning such awards, the AFGRI Legal team does us all proud and ensures that our brand is held in high esteem in such global communities, given that the In-House Community is comprised of over 20,000 individual members with a responsibility for legal and compliance issues in the Asia, Middle East and Africa regions.”

Pieter Badenhorst, who heads up the award-winning team, is no stranger to accolades such as this, and last year became the first General Counsel in Africa to win the “General Counsel of the Year” Award twice at the African Legal Awards. The team has also won several other awards.

“I would like to congratulate my entire team for this remarkable achievement, which endorses the winning qualities and reflects both the work ethic and the values we uphold. There can be no greater honour than being recognised by our peers internationally,” said Badenhorst. 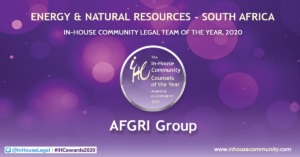 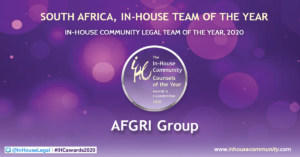 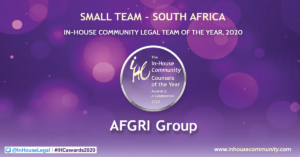