Pretoria, 27 February 2019 – The AFGRI Prestige Schools returns for its third instalment on 5 March 2019, since its inception in 2016. This year’s action sees a further six teams being added to the mix, bringing the total to 32 schoolboy rugby teams. What’s more is that this time around, an “AFGRI Team of Excellence” will be chosen from the 32 team after the rugby day, along with one player being announced “man of the match” after each game.

“As a proud sponsor of the Vodacom Bulls, we are equally committed to ensuring that new talent enters the game in the form of our youth, and there is no better way of doing this than by giving young players the chance to shine on the field and prove their merit. AFGRI holds passion like this dear, as it’s one of our values, along with teamwork, accountability, integrity, and service excellence – all of which can be applied to the game of rugby as a whole. We wish all the teams the best of luck, and look forward to the event,” says Tinus Prinsloo, CEO of AFGRI.

Teams will travel from all over South Africa, including the North West, Free State and as far afield as the Cape, to be part of the biggest schoolboy rugby day in the world held at a major rugby stadium, with the event taking place at Loftus Versfeld in Pretoria.

The competition has increased in size but the rules remain the same, with no kicking at goal and the use of rolling subs. This tournament marks the beginning of many of the participating schools’ seasons and they will be looking to start their preparations on a positive foot so one can be assured that the rugby on display will be of an impeccable standard.

According to Prinsloo, as the main sponsor of this prestigious event, AFGRI is honored to support the rugby community in such a way, and to witness future Springboks in action on the field.  “Schools from each of the provinces we support will be represented and it’s fantastic to have South Africa’s young talent all in one place at the same time!”

The AFGRI Prestige Schools is most definitely a platform to use to sharpen their skills, with the tournament’s most notable attendees being Springbok and Vodacom Bulls scrum half Embrose Papier.

Papier took part in the inaugural AFGRI Prestige Schools tournament in 2017 wearing the colours of Hoërskool Garsfontein and believes that tournaments like these help to expose junior players to the idea of playing in a stadium and a number of other pressures facing professional rugby players.

“Welcome to all the players attending the AFGRI Prestige Schools tournament. I was once in your shoes, a young player who wanted to go all the way in rugby and build a career. I want to say give it your all. You never know who is watching. This could be your opportunity. Never take any opportunity for granted. I just want to say go all out and remember to enjoy it as well”, Papier said

The spectacle of rugby also helps to unearth the buried gems while solidifying the position of players who have been identified as young talent already. “The Blue Bulls Company remains committed to schoolboy rugby development as the process of acquiring the next batch of Vodacom Bulls’ stalwarts starts here,” says BBCo CEO, Alfonso Meyer.

Meyer continued: “We also hope that by giving the schoolboys an opportunity to play at Loftus Versfeld will inspire them and make dreams come true”

School-going supporters are encouraged to wear their uniform to the AFGRI Prestige Schools Rugby day with the school that boasts the most supporters winning tickets to the clash between the Vodacom Bulls and the Chiefs on Saturday, 23 March. Entrance for children in school uniform is free, normal entrance will be R20,00. 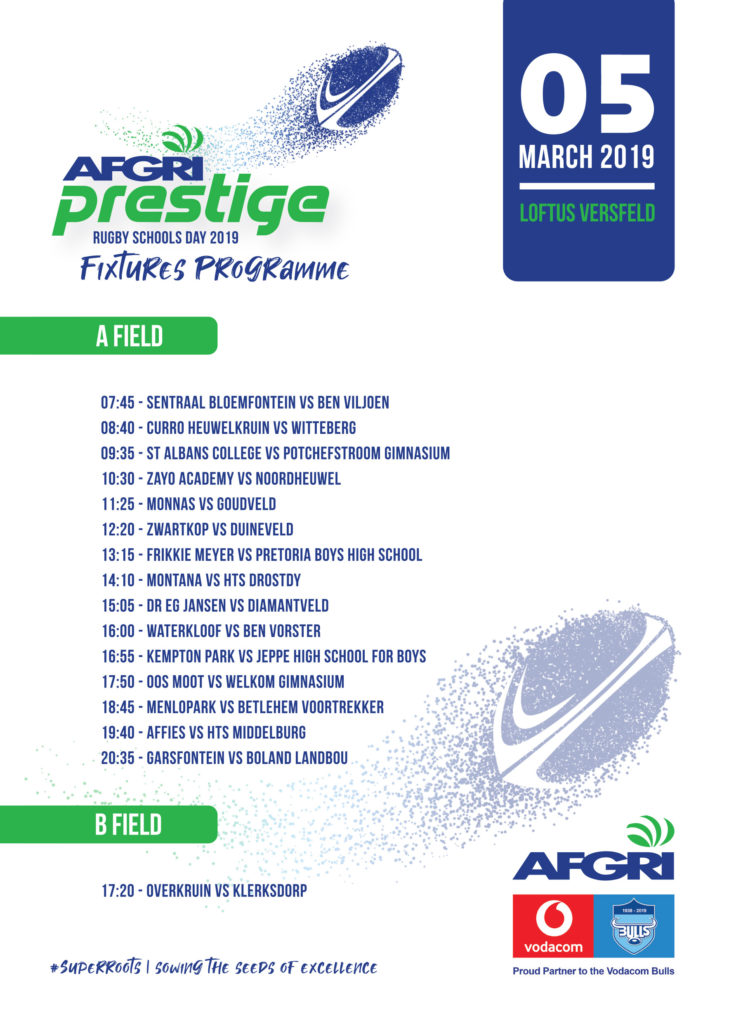 VODACOM BULLS IN RARE, BUT DESERVED WIN IN JOHANNESBURG
Scroll to top