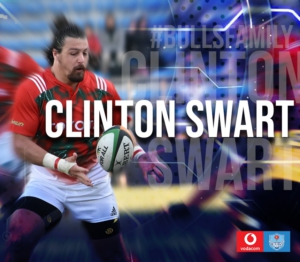 Swart is a versatile player who is an accomplished flyhalf with a proficient boot as a goal kicker and is also more than comfortable in the midfield. He represented the Pumas at Craven Week and Under 19 level before enrolling at the University of Pretoria. His return marks a homecoming of sorts for the talented back as he represented the Vodacom Blue Bulls U21 in 2012.

The brutally effective runner turned out for the Valke before he moved to Kimberley to don the Tafel Lager Griquas jersey and it was during his stay in the Northern Cape where his hard work paid off as he was drafted into the Toyota Cheetahs Vodacom Super Rugby squad.

In 2018, he linked up with Japanese Top League outfit, Toyota Verblitz, where he was coached by the current Vodacom Bulls Director of Rugby, Jake White, and played alongside fellow Vodacom Bulls newcomer Gio Aplon.

His signing will add immense value to the backs while his ability and experience will allow the backline more room to express themselves.

White welcomed Swart to the #BullsFamily, “I do not doubt that Clinton will fit in perfectly into our plans. He is an expressive and hard-running player with an immense work rate. Having worked with him and coached him before, he knows perfectly well what I expect of him.”