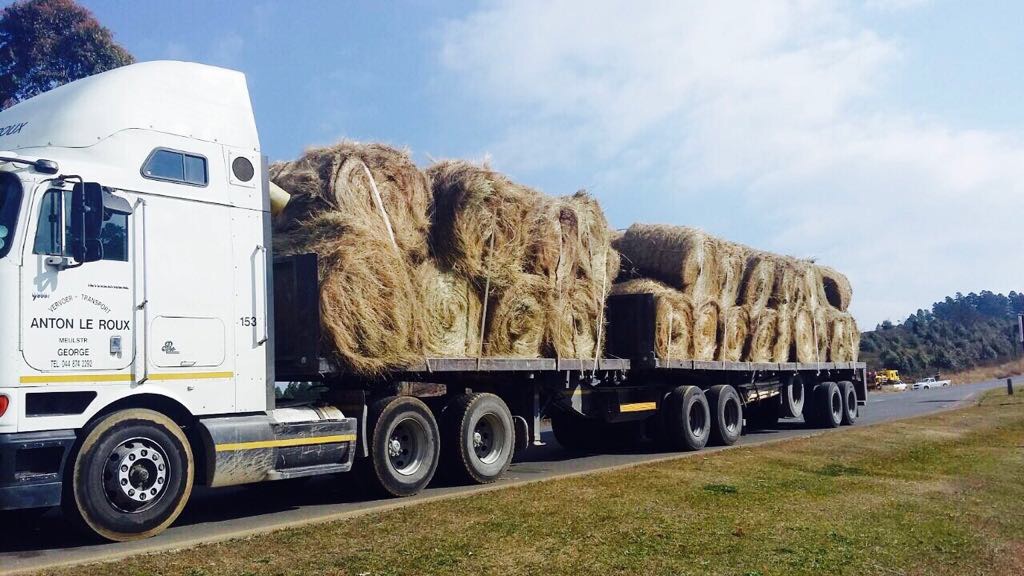 A month has passed since devastating wildfires caused havoc in the Southern and Eastern Cape regions, claiming lives and leaving many displaced. Apart from homes and businesses affected, the destructive fires also swept through numerous farms in the Thornhill district, destroying pastures, killing livestock and leaving the farming community in dire need of aid.

Several farmers in the Free State and KZN Midlands region, as far as Bothaville, Koppies, Danielsrus and Tweeling, have generously donated animal feeds to the farms in need. AFGRI partnered with these farmers to facilitate a structured and transparent platform and process through which large-scale hay donations could be sent to farms in the Thornhill district. The feeds donation, comprising hay bales and maize rests, amounted to more than a 1000 round bales. AFGRI Grain Producers further donated maize for trading, using proceeds to fund this project.

South Africa’s agricultural community is known for its generosity, resourcefulness and genuine support of fellow farmers in need. During 2015/16, when the Free State lay stricken with severe droughts and the province declared a disaster area, Cape farmers liberally assisted inland farms. Now, as the Eastern Cape faced the trail of damage left by the blaze, Free State and Midlands farmers were returning the favour by offering their support and bringing relief through these donations to farms in distress.

AFGRI is proud to be associated with the South African farming community and wishes to extend a heartfelt thank you to all the farmers that made this generous contribution possible.

Nevertheless, the cost of transporting the bales proved the biggest hurdle to overcome. Taking the task upon themselves, AFGRI ensured the transport costs were covered by involving several industry partners and formally sourcing additional financial contributions from our suppliers and business affiliates.

Feed donations from various farmers continue to come in, and we would like to fulfil the process by delivering all of the donations to the affected farms. To date, only 85% of the transportation costs have been covered. Should you wish to get involved by contributing financially, please email Phillippus Oosthuizen (Logistics Manager for AFGRI Animal Feeds): phillippus.oosthuizen@34.255.249.49.

As partner to the agricultural community, AFGRI is honoured to be involved in initiatives of this kind.