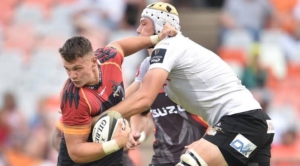 The Vodacom Bulls are proud and excited to announce that big Duane Vermeulen will captain the #BullsFamily, while Arno Botha and Gio Aplon will serve as deputies.

The 34-year-old World Cup winning no.8 is no stranger to leadership roles as he captained the Springboks against New Zealand in Wellington last year while he also wore the DHL Stormers’ armband in 2015.

Couple this with his experience of both Southern and Northern hemisphere rugby, on top of his never-back-down attitude and dedication to perfecting his craft, and it becomes easy to understand his appointment.

Loose forward Arno Botha and utility back Gio Aplon’s appointments as Vermeulen’s deputies were based on similar calculations with Botha (28) having always been earmarked to have a hand in the Vodacom Bulls’ leadership since his junior days at Loftus Versfeld where he led the Vodacom Blue Bulls at various levels including the Currie Cup.

The 37-year-old mercurial and hot stepping utility back Aplon brings a wealth of experience that includes the DHL Stormers, Grenoble and Toyota Verblitz while boasting 17 Springbok caps, he certainly knows how and when to bring the magic on the field. It is this experience that has created a level headed, tactical type of player which will serve the younger backs greatly in the coming seasons.

The Vodacom Bulls have always had the privilege of having some of the finest leaders in world rugby amongst their ranks and it is no different at present with the likes of Trevor Nyakane, Morné Steyn, Nizaam Carr and Ivan van Zyl all highly capable leaders, both on and off the field.

Vermeulen thanked White for showing faith in him as a leader while encouraging the loyal #BullsFamily supporters during this difficult time.

“It is always a privilege to play a game of rugby and it is one I never take for granted. It’s a massive honour to be appointed captain of this group, especially at this exciting time when so much is expected from us. A huge thank you must go out to Jake and the management team for trusting me with this immense privilege.”

“This year has been a difficult one for many South Africans but rugby will return and when it does the Vodacom Bulls will be ready to make you proud.”

This is the first year in the Lemang Agricultural Services training and development programme for Farmer D, who is very passionate about farming, and is a highly motivated individual. Farmer D spent most of his time on his farm during planting season, and his crop is beyond all expectations despite the relatively short period. He planted soya beans this season because of the drought, as he didn’t want to take too much risk, planting 75 ha and another 225 ha, which he owns in partnership with a neighbour. The crop estimate is currently around 1.5 tons per ha.

Humble beginnings meant that Farmer C originally farmed on 50 ha but three years ago this started to change when he joined the Lemang Agricultural Services training and development programme. Here he garnered much-needed training in the form of in-class training, on-farm technical training with agronomists, personal development, as well as basic computer training. Monitoring and mentorship took the form of regular visits to the farm, assistance in managing accounts to ensure payments to input suppliers were made, as well as assistance with pre-season budgeting and spending.

From the humble 50 ha, Farmer C has developed into farming on just over 400 ha, made up of 140 ha of maize, 260 ha of soya beans and 20 ha of sugar beans. Yields have increased so that he is now able to produce between 6 to 9 tons per ha of maize and 1,5 to 3 tons per ha of soya beans. Farmer C’s farm is also run with equipment he was able to finance from the profits. The training, mentorship and development programme has helped Farmer C learn the latest advanced techniques. By winning “Farmer of the Year”, he walked away with a brand-new tractor from John Deere, which will make his operation even more efficient.

In this case, Farmer B began farming in 2011, cultivating 150 ha of maize. In 2012 he joined the training and development programme, and through a combination of training, monitoring and mentorship the business has grown to 640 ha – comprising 300 ha of white maize, 300 ha of soya beans and 40 ha of sugar beans.

Initial yields were 500kg per ha, but today yields are up at between 4 to 7 tons per ha of maize and soya and 1 to 2 tons per ha of sugar beans. The farmer improved his mechanisation by purchasing a six-row planter and a harvester head for soya and maize, bought through access to the AFGRI hire purchase funding model.

In the 2013/2014 season Lemang Agricultural Services met this farmer in Metsweding for the first time. Only 68 ha had been planted using a planter that was incorrectly calibrated, thus creating large, inefficient gaps amongst the maize plants. This led to an infestation of weeds. The AFGRI training and development programme that Farmer A signed up for included farmer study groups, in-class training, basic computer training, and on-farm assistance by agronomists.

This, combined with mentorship, also ensured that the farmer’s confidence in his skills and abilities was engrained. Finance provided by AFGRI ensured that he could purchase an additional 22 ha of land, bringing the total to 100 ha. Weed management was also under control, with an excellent crop on the land. Full repayment of the production loan has been made, and the next step is to plant 120 ha. This is made possible through the confidence to lease additional land, as well as having a true partner where farming matters can be discussed, and the best course of action implemented.