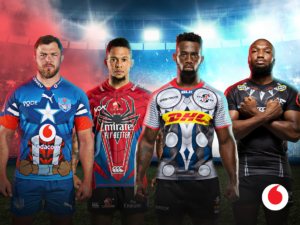 The grass on Loftus Versfeld looks immaculate, the lines have been painted and the players have been preparing to return to rugby for several weeks under various lockdown regulations.

It has been a frustrating time for the rugby community but that is set to change to jubilation on Saturday, 26 September 2020, when Loftus Versfeld hosts the Vodacom Super Fan Saturday which sees a double header of matches with the Vodacom Bulls defending their turf against the Cell C Sharks, and the Emirates Lions facing off against the DHL Stormers.

Vodacom Bulls Director of Rugby, Jake White, has announced a 30 man strong match day squad that will do battle come Saturday. It is a squad that is brimming with Springbok experience and a youthful injection of the next generation of superstars.

World Cup winning no.8 Duane Vermeulen will lead this new look Vodacom Bulls squad that includes many of the new signings made during the COVID enforced off-season.

The backs are not only loaded with speed that could make a cheetah stop and take note, but has the experience of several Springboks including Gio Aplon, Morné Steyn, Embrose Papier, Cornal Hendricks, Travis Ismaiel and Ivan van Zyl while boasting two Blitzbok in Stedman Gans and Kurt-lee Arendse. This vast array of experience is well complimented by a host of youngsters that are eagerly waiting to be unleashed among the backs.

It is much the same amongst the forwards with the pack oozing Springboks, Blitzboks and Junior Springbok talent… giving Vodacom Bulls Director of Rugby, Jake White, the best selection headache possible.

New forward signings Jacques van Rooyen, Sintu Manjezi and Jan-Hendrik Wessels will get the opportunity to charge the length and breadth of Loftus Versfeld as the squad prepares to lock horns with their coastal foes in what is expected to be a clash of titans, and the ultimate exhibition to restart rugby.

“The time for talking is over. We’ve prepared for this moment for weeks now and the boys just want to get out and play. Their commitment and dedication to the way we want to play is reassuring. Now it is time to go out there and to ensure all those long hours in the sun training and perfecting our craft is rewarded by a victory,” said Vodacom Bulls Director of Rugby, Jake White.

All the action can be seen on SuperSport with the Vodacom Bulls kicking things off against the Cell C Sharks at 16:30, and the Emirates Lions set to kick-off against the DHL Stormers at 19:00.

The battle lines are being drawn for a Castle Lager Springbok Showdown, which will pit the best local stars and top, up-and-coming talent against each other on 3 October, as SA Rugby announced its plans today to reignite an exciting four-month local season.

The selection process will take the form of a draft pick from an enlarged squad of 60 players with Green and Gold team bosses taking alternate turns in an old-style ‘schoolyard pick’ to assemble their match-day squads of 25 players each.

The drama will unfold live on SuperSport, with the enlarged squad set to be announced live on Saturday before the crucial draft pick next week.

“This will not only be an opportunity to see the best of the best available in South Africa square off against each other in what promises to be something never seen before, but it will also provide the players with another valuable opportunity to shake off the rust and get the legs and lungs going after not playing any rugby in the last six months,” said Erasmus.

“The players will be encouraged to showcase their skills – individually and in their teams – and while it will be full-on, we’re expecting to see a highly competitive match of quality players against each other.

“It will be exciting – from the moment we select the squads, with several twists thrown in for good measure – through the build-up to the match and the actual encounter in Cape Town.”

To kick things off though, the local rugby season will resume on 26 September with a double-header at Loftus Versfeld in Pretoria, when the Vodacom Bulls take on the Cell C Sharks and the Emirates Lions battle the DHL Stormers on Vodacom Super Fan Saturday.

These matches will be followed by the Castle Lager Springbok Showdown at DHL Newlands, after which a double round local competition, between seven franchises, kicks off on the weekend of 10 October.

Details of the local competition, with each of the teams facing the others home and away and every side enjoying two byes during the competition, will be released in due course.

In what is another first for South African rugby, the local competition will continue over Christmas and New Year and will culminate in semi-finals (16 January) and a final on 23 January next year.

“This is a very exciting plan for the next few months, considering all the challenges we’ve faced this year due to the COVID-19 pandemic and it will be great to see our best local rugby heroes battle it out from October to January,” said Jurie Roux, CEO of SA Rugby.

“We’ve worked very hard with Government, SuperSport, our various sponsors and the franchises to get to this point and it’s great to know we can now look forward to brilliant provincial rugby being played in the next couple of months.

“Unfortunately, spectators won’t be allowed inside the stadiums as we are still working with certain COVID-19 regulations.”

Roux said that plans for the Springboks to play the Castle Lager Rugby Championship in Australia were still being pursued but were dependent on international travel and other governmental restrictions as well as player wellness and high-performance considerations.

“We’re still not in a position to confirm plans for the Springboks, but it remains our wish that they play Tests this year,” said Roux.

“It would not only be great to see the Rugby World Cup champions in action, but it would also give the Bok management valuable preparation for next year’s tour of the British & Irish Lions.”

Competition formats and all the fixtures will be confirmed shortly.

In April 2020 I updated you on the position that the Land Bank (“the Bank”) found itself in. In line with the commitment to keeping you informed on this issue, please take the time to read this important update outlining some new developments. As ever, UNIGRO remains committed to ensuring it is doing all it can to ensure our customers’ needs are addressed, even in tough situations.

You may recall that on 21 January 2020 Moody’s Investor Service (“Moody’s”) announced the downgrade of the Bank’s issuer rating from Baa3 to Ba1, and its long-term national scale issuer rating from Aa1 to Aa3.  Following Moody’s subsequent downgrade of South Africa’s sovereign credit rating on 27 March 2020, another downward rating adjustment was made to all state-owned entities, including the Land Bank, meaning that the Bank’s issuer rating was downgraded again from Ba1 to Ba2.

As I explained previously, these events had a significant impact on the liquidity position (cash flow) of the Bank, meaning it was not able to meet immediate obligations to settle a repayment under the terms of a revolving credit facility with one of its lenders. The non-payment constituted a default. At the time, the Bank indicated that it was in consultation with the lender concerned to negotiate a waiver and an extension of the repayment date. These consultations are ongoing and have not to our knowledge been finalised.

I also said at the time that any potential default could prevent the Bank from raising funding. The Land Bank’s inability to raise funding would make it difficult for it to meet its disbursement obligations under a Service Level Agreement. This in turn could negatively impact on UNIGRO’s ability to provide liquidity to farmers through our loan agreements.

Because UNIGRO and the Bank have had a significant partnership in place through the Service Level Agreement since 2011, we have held several meetings with the Bank both before this situation developed and throughout the crisis, and we remain in constant communication with key stakeholders.

As far as UNIGRO is aware, the R3 billion injection approved by Government has unfortunately not yet materialised. As the situation remains unremedied by both the Bank and by Government, what I warned against has now happened, with an unfortunate knock-on effect on UNIGRO and potentially our ability to lend fully to customers.

We have therefore proactively started a process of sourcing alternative funding and are in the process of securing a maximum of R2 billion in short-term finance, R7 billion in longer-term finance as well as additional short-term syndicated and other funding for facilities to try to mitigate this crisis.

UNIGRO will further ensure that going forward, even if the Bank receives the R3 billion in funding from Government, our own funding lines are diversified to limit risk to our customers. However, due to the size of these funding lines, and in the current economic climate, negotiations are taking a little longer than expected and this in turn means that UNIGRO disbursements to farmers could be at a reduced rate until such time as liquidity is restored, and the Land Bank is able to meet its commitments under our Service Level Agreement. We ask for your understanding in this regard, and expect that the new secured lines of funding will be in place by the end of the year.

In the interim. I urge you to please remain in contact with your relationship manager, as things can change at very short notice in this climate of uncertainty.

Finally, thank you for your continued support of UNIGRO and the AFGRI Group. Please liaise with your relationship manager for updates, although as soon as we have further clarity on developments with regards to the Bank, I will communicate with you again.

Together we will make it through this unprecedented time for our area and the country.

NAMPO Virtual enables farmers, producers and the agri industry at large to log in from Virtually Anywhere and Virtually Everywhere, from within South African and across the border to participate in the bumper four-day trade show, AgriXtra conference digital TV channel, Agri in Motion panel discussions as well as a variety programme on the Main Stage.

It is a first for NAMPO Virtual and visitors to attend and experience both the show floor and the informative digital TV programme at no cost.

Visit www.nampovirtual.co.za to view the full conference and entertainment programme as well as viewing the Exhibitor List to see who is exhibiting.

NAMPO Virtual agriculture exhibition and AgriXTra digital TV channel is open from Wednesday 9 September and runs until Saturday 12 September 2020. Show hours are 09:00 – 19:00 daily except Saturday when the show closes at 14:00.

Springbok lock, Jason Jenkins, has returned to Loftus Versfeld on a short-term loan from Japanese Top League outfit, Toyota Verblitz, and will be available for the impending South African domestic competition.

The 24-year-old Jenkins joined the Vodacom Bulls in 2013 and represented the franchise from U19 level and all the way up to Vodacom Super Rugby. He represented the Junior Springboks and South Africa A before earning his Springbok cap against Wales in Washington DC in June, 2017.

Jenkins’ return adds more beef to the lock forwards as this behemoth weighs 122kg and stands at 2.01m. Aline this with his dynamic skill set and physicality between the for lines, he is without a doubt a welcomed return to the Vodacom Bulls.